Live From The Field 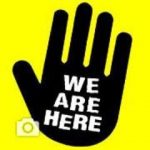 News from  We Are Here, “camping The Garage” and more….
#⬆️🧐
Art. 1. Everyone should be treated equal, no exceptions
After long time an update about the terrible situation of the undocumented or not right documented or over-documented, full of mistakes, mainly African, black, refugees in Amsterdam.
In the old broken garage, without walls and anythings but tents, in this cold,
are living about 100, mainly very young men who can not go anywhere else.
Not any right to do anything.
The government of Amsterdam don’t pay anything for them, no help, only being scared for police and IND and lock them up in detention center, in cells, waiting to be deported to countries where there’s war, where there’s poverty, because everything is robbed away by greedy and conscienceless people, who are hiding themselves behind others,
who should have the responsibility in this unethical bureaucratic system.
Then….. Who is responsible?
Our Mayor?
Who threaten with urgent eviction and detention alias deportation?
Her deputy?
Who pretests help the refugees but signs also urgent evictions and allows the risks and let them been hunted?
Our minister? The European Comission? Who pays more than 1 milliard of development money to more border-control?
More weapons and more walls?
The Pope?  …..?  Other religious institutions? Because one thing is clear…the refugees are not allowed to be responsible for themselves….?
Is slavery-industry just changed in refugee-industry?
Where are all he subsidies which go which should be for the refugees?
Not to the people off We Are Here or the people in Asylumcenters…
The most money go to other…things.
In 1 week 2 terrible arrestations.
1e  last Friday, 6 oclick in the morning, in a Asylumcentrum, while waiting for news, lifted out his bed bij 9 policemen, was not even allowed to wash his face…a boy whos to good for this world where he has nobody but us.
2e…Sundayevening, 23.45,20 man police, dogs, surrounded bij police, in the garage, code orange, everyone driven outside, more than 80 human beings in the freezing cold. By a false accusation from a w…. speedjunk. After a scary moment with him. I was the only witness. That’s why he’s free from criminal act but also in Rotterdam detention Centre to be deported……
More  than 100 human beings are surviving in a freezing cold garage.
Now 3 months and 15 of March they have to leave…but to where?
Coming Sunday 5 women will be put on the street who have been living for many months in a place with agreement.
Sunday the agreement stops……. Must they go also in the garage?
Please…help us……
Temporally place for the woman
Financial support for food, gas, and many more:
Stichting (stichting} family on a mission,
#Mandelakids’  tikkie.me/pay/tm7c0glvnekpbjt5kkf5
Financial support for activities and supplies:
Foundation (stichting) Gelukszoekers
NL97 INGB 0007 5510 82
Financial support for detention visits, for people in detention, communication and other costs on the streets and in the garage:
NL17TRIO0379714574, AMJ Meurs
De #Government does it NOT, de #State does it NOT!
You can do it!
#⬆️🧐
Suggestion and information and any other support:
Weareherexxx@gmail.com